Portwell, Inc., (www.portwell.eu) a world-leading innovator in the Industrial PC (IPC) market and an Associate member of the Intel® Internet of Things Solutions Alliance, today announces the release of the WEBS-21D0, a fan-less embedded system featuring Intel® Atom® processor E3900 series (formerly Apollo Lake). Its rugged, compact design, plus low power consumption, make WEBS-21D0 a perfect solution for applications in kiosk, digital signage, in-vehicle mobile video surveillance, medical, and the harsh environments of factory automation.
According to Yaling Sun, Portwell´s product manager, the new rugged WEBS-21D0 is equipped with the Portwell NANO-6062, a Nano-ITX form factor embedded board based on the Intel® Atom® processor E3900 series, which integrates the low power Intel® Gen9 graphics engine with up to 18 execution units that improves 3D graphics performance and supports faster 4K encode and decode operations. The compact WEBS-21D0 embedded system also features DDR3L SO-DIMM up to 8GB supporting 1866/1600 MT/s; dual USB 3.0 ports (up to four as optional); one DisplayPort (DP) on rear I/O with resolution up to 4096 x 2160; one legacy VGA interface support; one smart COM port for RS-232/422/485 selected by BIOS; and multiple storage with 2.5" HDD/SSD, mSATA as well as micro SD card. In addition, the compact 150mm x 150mm x 60mm chassis platform integrates the latest M.2 type E interface, which provides wireless connectivity such as Wi-Fi, Bluetooth and NFC (near-field communication) functionalities. "It can serve as an ideal solution as an IoT gateway," explains Sun.

"The Portwell WEBS-21D0 delivers greater and faster performance than its predecessors," says Sun, "yet it is still packed within a compact 150mm x 150mm x 60mm system dimension. Moreover," Sun adds, "not only does it operate with thermal design power (TDP) under 12W for fan-less applications, but it also supports a wide voltage of power input from 12V to 24V for rugged applications."

"In addition to wall mounting, WEBS-21D0 supports VESA mounting and DIN-rail mounting," Sun states. "With its fan-less design together with superior, up to quad-core processing power and high capability, the Portwell WEBS-21D0 embedded system is indeed an ideal solution for digital signage, loT gateway and factory automation applications," confirms Sun. 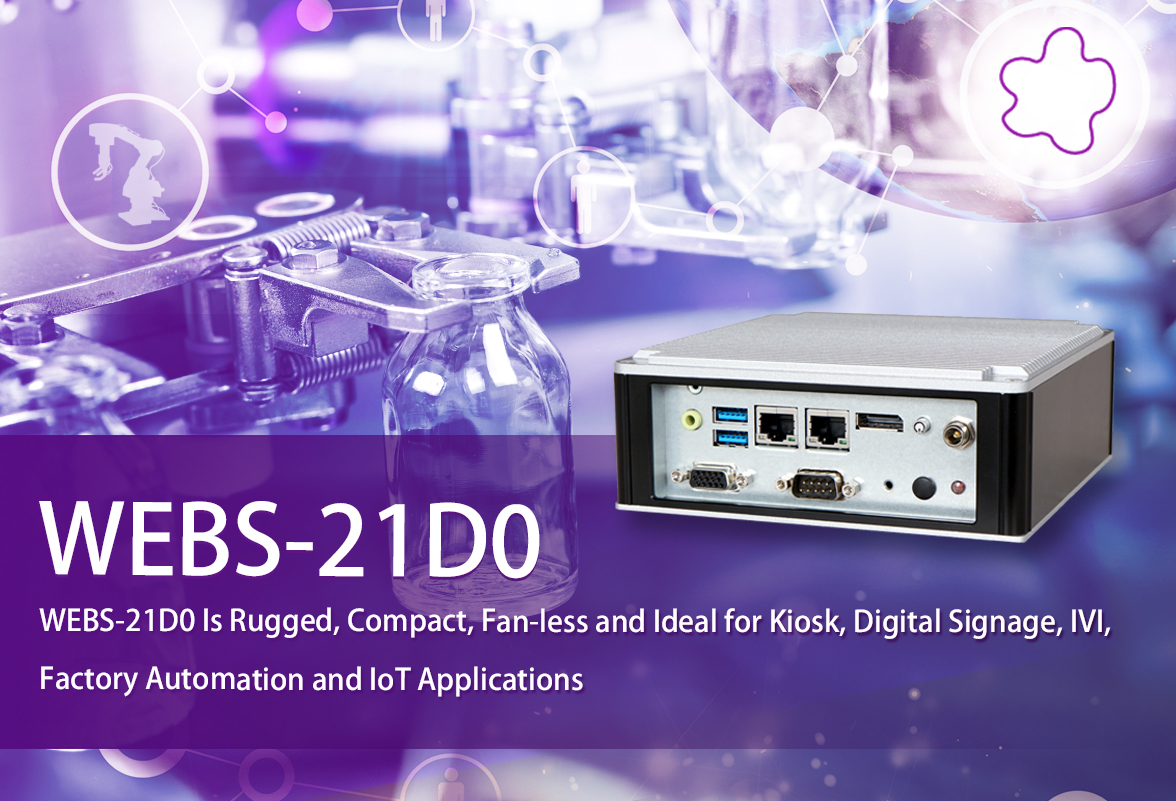