New PQ7-M109 module delivers up to 1.5x improvement in multi-thread computing performance and up to 2x faster graphics performance compared to previous generation

Nieuw Vennep, Netherlands, March 31, 2021 —Portwell, (https://www.portwell.eu), a world-leading innovator for Industrial PC (IPC) and embedded computing solutions, and an associate member of the Intel Internet of Things (IoT) Solutions Alliance, announces PQ7-M109, the latest addition to its portfolio of embedded Qseven solutions. According to Peter Ahne, Marketing Director Portwell Europe, the new PQ7-M109 is a Qseven 2.1 module with Intel Atom x6000E series/Celeron®/Pentium® processor (Elkhart Lake platform) based on 10nm technology, supports up to 4 cores with 4.5W—12W TDP and integrates the Intel Gen 11 UHD Graphics Engine with triple display support in 4K resolution. Portwell’s PQ7-M109 features onboard LPDDR4 3200 MT/s with In-Band ECC (IBECC) up to 8 GB which allows more affordable standard memory to be used instead of ECC memory (ECC or Non-ECC can be configured by BIOS) and can improve safety and reliability; onboard eMMC 5.1 up to 256GB; triple independent displays that include dual-channel LVDS up to 1920x1200 @60Hz, which can be swapped out for eDP, plus two other DDI options to either DisplayPort 1.4 or HDMI 2.0b up to 4K resolution; 2 x USB 3.2 Gen 1, 6 x USB 2.0, 2 x SATA III, 4 x PCIe Gen 3 x1; 1 x Gigabit Ethernet; Other I/O interfaces such as SDIO, I2C, HDA, JTAG, SMBus, LPC, CAN bus and UART; supports ACPI 5.0 power management and Fully Integrated Voltage Regulator (FIVR); and supports wide operating temperature range from -40° to 85°C; and onboard TPM 2.0 for security.

“In addition,” Peter Ahne states, “our new PQ7-M109 module supports new advanced features that boost IoT designs from the edge to the Cloud, including Enhanced Integration with Intel Programmable Service Engine (PSE), an ARM™ Cortex™ M7-based management engine/co-processor to reduce CPU load and provide IoT functions such as remote out-of-band (OOB) device management that provides access/power control to edge devices even when they are powered down or the OS is unresponsive. These new advanced features also include the fully integrated voltage regulator (FIVR) for power management with simplified design, plus the support of Intel OpenVino™ toolkit and Media SDK to improve performance and accelerate video inferencing workload.”

“We are proud to launch our PQ7-M109 module,” says Peter Ahne. “Its features and benefits cement Portwell as a leading Qseven solution provider for the embedded systems market. Its small form factor is suitable for compact systems where space is at a premium. It provides an optimized balance of thermal and computing performance that is both 1.5 times better and twice the graphics performance as its predecessor; triple independent displays with selectable options that support up to 4K resolution; and flexible I/O interfaces. What’s more, the PQ7-M109 supports the latest Intel Atom x6000E series/Celeron/Pentium processors with double cache, higher memory bandwidth and In-Band ECC feature, larger eMMC capacity, more USB ports and PCIe Gen 3 lanes. In fact,” PeterAhne confirms, “this is the first time PCIe Gen 3 is available in the lower-power processors.

“We have also made it easy for existing customers to upgrade from the previous Qseven module so they can quickly and easily take advantage of the higher performance and lower power consumption of the new PQ7-M109. In short,” Peter Ahne states, “with the launch of the PQ7-M109, our customers not only benefit from the most up-to-date technology and features, and faster time-to-market for their end product, but they also gain peace of mind from the long product life span (10+ years) inherent with every Portwell product.” 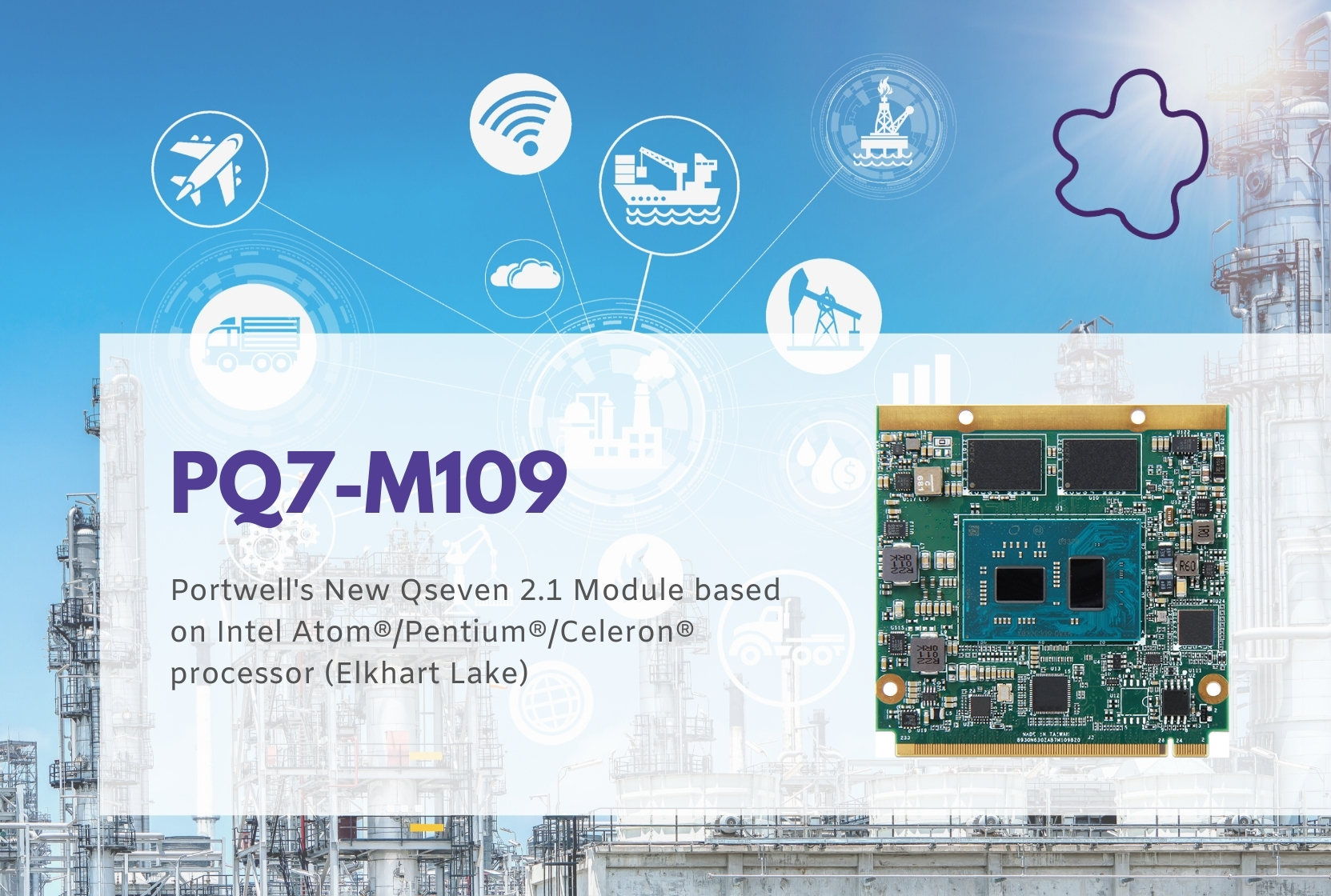